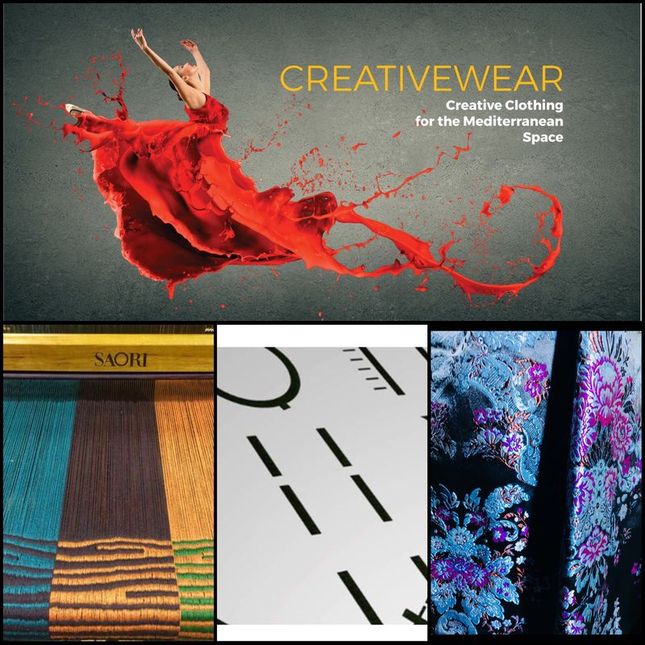 Valencian Region is very rich at cultural level with two important Intangible Cultural Heritage: “Las Fallas” in which multitude of artisan and traditional sectors involved make it a social, economic and cultural engine and “Moors and Christians”, commemorate the battles and fighting between Moors and Christians during the Reconquista period. The Valencia Hub prototypes inspiration come from Valencian typical and cultural clothing realized using new sustainable techniques, such as laser technology, without losing the tradition of its manufacture by working closely with local artists, dressmakers and Valencian textile companies.

Exhibition dedicated to INMATEX research on materials for reactivating the perceptive-sensory characteristics of soft surfaces. The exhibition leads to a process of classification of materials according to sensory gradients to achieve the enhancement of their perceptive characteristics through processes of interaction between surfaces. In this way it intercepts some of the main frontiers of contemporary research on visual arts for the reactivation of material relations in the digital age. These studies on identity materials of the territories and the know-how that characterizes them also allows us to weave heritage stories with process innovations and to act "global" through a "local" thought.

The performance takes its name from the word affordances, developed by James Gibson as quality of distance and manipulability of the space. In the first part Claudia Di Gangi explores space as original place, closed and indistinct. The performance will continue developing the nexus of identity and liberation, as a separation between subject and place. Afford Dance reflects this original drama by placing the latter part of the performance as a solution, between identity and place, offered by a new relationship: empathy.

The artist’s performance will include the creation of a fabric made on an 8-heddled loom; the warp comprises non-mercerized, natural, 3-strand cotton yarn and is mounted on a reed with 4 wires per cm, for a total of 40 cm. The weave is made of natural nettle alternated with bleached nettle, and the resulting fabric will be antistatic and hypoallergenic and will have a good absorption capacity. The nettle weaving will be airy like linen, but will have a gleam similar to silk. Long, shiny, soft and strong when twisted, the nettle weaving is very resistant and, unlike other fibers, its resistance increases over time. The resulting weaveand the new fabric originate from the recovery of drawings and historic techniques, but are reinterpreted and introduced to make them practical according to modern concepts.

Barbara Cammarata | A Protest Against Forgetting

'A Protest Against Forgetting' traces a current condition. It is mainly a work / relational action, of contamination and cultural re-appropriation that aims at human interactions in their social context. The work is part of a larger project, Crossing. We wondered how research, design and technology can be used to improve the culture and social fabric of rural communities. These issues were explored together with the students of London Metropolitan University in London and the young NGO Le Seppie, founded by Rita Elvira Adamo and Florian Siegel. The meetings (among the students, the migrants and the natives), the stories, the differences, the similarities and the consequent fusion of these elements were necessary for the construction of a large mapping of a place in a particular moment. The participants were asked to co-operate for the construction of a map devoid of territorial, political, religious partitions, etc., a liquid globe deployed on a fabric in which boundaries are lost, a great work textile, as a result of an evocative narrative of a given present condition. Different mediums have been used, linked in part to the textile tradition, such as embroidery, design, sewing or applications, referring to the incomparable work of the Arpilleras.

In the Future Dream series, Rachel Morellet presents her eclectic world of symbols, printed on paper and retouched in acrylic. Determinated in defining future costumes, she explores with a simple language - and which recalls the reduction of forms - the multiple declinations of everyday life, between subjective impulses and social conventions. It is a precise grammar, which the artist defines from a series of constraints related to materials, shapes, weights, climate, etc., which she manages to transcribe using black lines. Going beyond the concept of appearance, it brings together, about a minimalist gesture, different approaches to life, revealed through the style of a garment, which seems to engage our imagination.

Relational work of art, created with fabric scraps of Prato textile companies, by Tatiana Villani - Emanuela Baldi - Manuela Mancioppi. Three artists, co-authors of a single project - have created a creative, interpersonal and spatial relationship through the creation of a large installation made of woven fabrics from various Prato textile companies, not a precise shape but a set of shapes starting from materials recovered and transformed, which represent the sum of the actions, thoughts and words of each person who took part. "Fuori dal trecciato" is a multi-level intervention, a micro-contamination of space, a means of interweaving mutual knowledge and opening space for people and the city of Prato.

Since the primal times the image of the woman has always played a secondary role compared to the male one. Considered as a very important and necessary figure within the family, the woman of the first half of the twentieth century still appears to be a "prisoner" of male influence, first subjected to father authority and then to that of her husband.
In the work “Reticoli” antique vernacular photographs found in attics, flea markets and forgotten old boxes are combined with geometric and light embroideries of the artist's hand, creating a new story where women of the '30s,' 40s, '50s make their way into a world mostly masculine and find, in an ironic way, an authority and a power that was not granted at that time.